How to install opera on linux?

How to install ssh in linux?

How to install openssl in linux ubuntu?

How to install arduino ide in ubuntu?

Computer Game Reviews is a website for anyone to who is interested in writing or reading computer game reviews. We love games and want to make sure that you’re up-to-date with what’s hot and what’s not! My reviews can be found under the different categories, but feel free to post your own in the appropriate platform group. If your into playing computer games or you want to write your own reviews you have come to the right place.

You can swop information with you friends and join groups of people who are into the same games platform as yourself. Get advice on games and post you own questions, reviews and even write a blog post.

Bad Company 2 on Ps3 is not as good as PC. That does not mean to say it isn’t good. The controls take a few tries to get the hang of (R2 is knife and L2 is grenade) and servers were quite quiet, but now, in the anticipation of BF3, my guess is that people who originally didn’t give Battlefield a second thought are now buying BC 2 to see if the gameplay is good. This has led to a sudden explosion of activity, and now the game is really enjoyable. Although Dice spend more time on the PC version, the second best is not something complain about.

well, since I have already written a review on BC 2, there really isn’t much I can say apart from the differences in technique and actual gameplay. Since quite a lot of the servers are made up of ‘COD Players’ trying it out, there is an obvious change in the gameplay from PC. There is a quite noticeable increase in snipers, which is one of the most frustrating things about this game on the PS3, and a LOT of campers. Most people I talk to think this is the usual gameplay, whereas it’s just everyone else thinking they can get away with it. And one last thing. When I tried Squad Rush, I didn’t get one shot out of my gun. This was because of the enemy squad, standing next to the spawn point, spawn killing, endlessly.

Apart from these disappointing notes, the game is really good, and a lot of fun. I would recommend it, definitely, apart from the fact that BF3 is a month away, and that will be so much better! It’s not much, but there is not really much else to say. Only get this, though, if your computer won’t run it, because BC 2 is way better on PC. Anyway, my rating for BC 2 on the PS3 is 9/10. Enjoy! 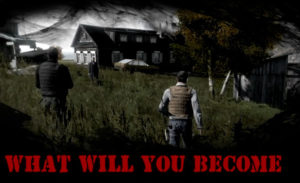 DayZ is a modification for the game Arma 2 and the expansion Arma 2: Operation Arrowhead. The mod is currently free and in it’s alpha stage. It is a 225km squared open-world survival game set in a land called Chernarus. During your time there you will encounter many things trying to end your life, such as zombies, or Zeds, hunger, thirst, infection, and the most dangerous yet potentially life-saving, your fellow human beings.

I was first introduced to DayZ by a friend. After watching a video on it, we realised that this was the game we had always wanted: a zombie-style open-world game where the goal was to survive. I spent the rest of the evening watching videos of it until I couldn’t wait any longer and bought Arma 2 and the expansion.

Anyone who is remotely good at DayZ will tell you that you will almost certainly spend your first few lives learning how the game works. I know I did. Once past this stage, things start to get exciting. You will meet a player for the first time, and it will probably end in your death. You might be lucky enough to find a tent and begin to construct a camp for you and your friends. You will probably then get a bit cocky, go to an airfield, and wind up dead again. No matter. Lessons will be learnt.

This game is not about winning; this game is about living in the moment, feeling the fear of imminent death or the excitement of finding your first vehicle.  For me, DayZ is the most thrilling and also stressful and nerve-wracking game I have ever player; no matter where I am in the map, I do not feel safe. This is what makes it so great to play. It  feels real. Great, you unlocked a new gun in Battlefield. Now what? Most of the time when I D/C from DayZ I am shaking slightly from the adrenaline. I am yet to find a game that can do that.

Now before anyone starts complaining, this game is in alpha. There will be bugs. There will be glitches. There will be kids trying to spoil the fun and there will be hackers. I for one have experienced all four of those. however it is not something to put you off this game. Every time I log in I know that there is a chance someone has spawned in a fighter jet and is bombing the whole of Chernarus, or that my tent full of goodies has been swallowed be a server restart. Someone could, and has in the past, teleport every player to a makeshift arena called the Thunderdomeand demanded we fight to the death. Before you are put off, I survived. I left with more than I went with. Anyway, back to the point. Buying Arma 2 just for DayZ, in my opinion, is so worth it. I have played roughly sixty hours, and each one is an hour well spent. If you don’t want to, though, and it is a shame if you don’t, then the standalone version of DayZ being scheduled for Christmas. I am not absolutely certain of this, but it is probably not far away.

DayZ, even in it’s glitchy state of alpha, is worth at least a 9.5/10. This includes the hacking, exploits, glitches and bugs. I may have increase the scale when the standalone is released. This game is one I would strongly recommend to anyone.