Tried To Get A Video of Bees on Our Rhododendrons

Tried To Get A Video of Bees on Our Rhododendrons

I was out looking around the yard this morning to see what new things are sprouting or flowering. So much fun having a home garden to enjoy. Anyways I saw a couple of bees flying around our rhododendron so I got my video camera. 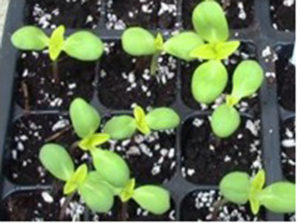 Well as soon as the bees saw me they made a bee-line for somewhere else but I shot the video anyways.

Soon our red rhododendron will be blossoming. I hope to get a few nice shots of that over then next week.

Praying Hands Plant Gets A New Pot After 30 Years

Well it’s been rainy for the past few days here in Moncton, well all over New Brunswick really. I want to be outside in our home garden so I was getting a bit edgy stuck in the house.

So I decided to start a few more herbs and then decided to take my 30 year old praying hands plant, which has been in the same pot all that time and give it a new bigger pot.

Short story: Before I became a married man, 30 years ago this past April, I had a girl as my very best friend. I met Cathy shortly after moving to Moncton and we just hit it off and did pretty much everything together.

I was only looking for a friend although she had other plans and thought for sure I would eventually marry her. Well that didn’t happen but she took it will and even gave me this gorgeous prayer plants. Forgive the poor quality image. In real life it’s a much brighter coloured plant.

Well that plant has been a favourite for all those years and the fact it was in pot made from the bark of a tree made it even better.

Sadly in the past year my prayer plant has taken a turn for the worse and I knew it was because it had finally become completely root bound. Over the years I have cleaned it up and given it new dirt but now it’s just not going to survive if I don’t do something.

I transplanted it to another, bigger, container. It was so root bound I had to dig my hands into the roots in order to pull it free from the pot it was in.

I really love decorative containers like our bark container and  think I it will come back fine. Once it does I am going to break it up into multiple plants and put one of them back into the original bark container.

Just another week or two and I’m ready to plant my starter plants into our vegetable garden. I always tend to wait until at least the second week of June to avoid the possibility of a late frost the could end my starter plants over night.

Even though I was raised in Ontario and now live in Moncton, New Brunswick I feel the June 10th rule works just as well. Example: We had temperatures that went almost to freezing the last two nights. So glad I waited.

I started my veggie seeds from Mike The Gardener’s Seed of the Month Club just about a month ago and have had them growing in our garage, in a mini green house I purchased just for making my seeds hardier. It seems to have worked as they look a whole lot better than my last year attempt at starting from seed.

I started my seeds indoors, right in our living room. They stayed warm and moist but as soon as they sprouted it was out to the garage and into our new mini greenhouse to grow strong and sturdy before I could plant them in our garden.

Each day I let them experience a bit of our weather but kept them safe from the cold, too much wind to early, and lots of direct sunlight. It was the lack of direct sunlight that forced me into buying starter plants last year, again.

So glad I didn’t hurry the planting as the last two nights have come very close to freezing. Even after I plant them I will keep an eye on the forecasts and cover some of my vegetables so they survive. We might just have our best vegetable gardening season yet.

A Sunday in May: The Rhododendron Walk

My Sunday started just before 5am. I was awake and ready to get up but I heard some birds singing and talking to other birds so I laid there a while longer and listened to their songs. Very relaxing.

Last year we only heard crows as they had a nest in one of the tall pines in our yard. They may not be the sweetest birds but still part of nature plus we got to watch Chris the Crow learn to fly with Mom, Dad and last year’s siblings.

Eventually I got up, had breakfast and then went for a nice long walk through the streets of Moncton. I like walking early while it’s still cool enough to really enjoy it. Once it gets to hot it takes too much energy.

A couple of days ago our rhododendron looked like the image to the left but just a day can make such a difference.

As soon as I looked outside I saw our rhododendron getting close to full blossoms so I started my walk by going through our yard and taking a few pictures first.

You can see by the image below it’s starting to look pretty good and will be in full bloom in a couple more days of sun. We always look forward to that. 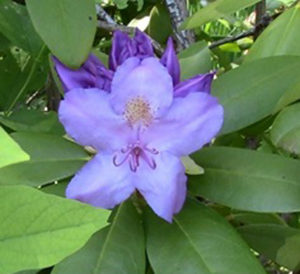 Then I hit the sidewalk and headed down Walsh street toward Moncton City Hospital. Before I reached the next block I saw a rhododendrons already in full bloom that wasn’t even starting a few days ago.

I took lots of other pictures along the way and then yet another rhododendron even more beautiful that the one before. The house was bit back from the road so I wasn’t able to get as nice a picture as I would have liked but it’s still gorgeous.

I managed to take a zoomed in image that is a little fuzzy. Maybe I’ll get back out for a walk today and snap a better picture. If the home owners are out I will ask permission to walk on their lawn so I can get a much closer picture with some definition to it.

I like to walk in different directions so I don’t get bored with walking but at this time of year it’s hard to get bored but I like to see what others are planting in their yard and home gardens. Here is an image I just couldn’t pass by.

Jenny thought this was the cutest picture of the day so I had to include it. Speak No Evil, errr I mean, Croak Croak Croak.