This is probably because as a comic-book geek, I’m not as familiar with The Green Lantern as I should be and the last time I played a movie tie-in was GI Joe – and the memories of that experience are still very, very painful. Read more at: https://rightpicktoday.com/blog/the-best-gaming-headsets-for-xbox-one how to use gaming headset Xbox One?

Starting off with a cutscene, it is established that the game is set sometime after Hal Jordan has acquired the power ring which gives him his special abilities to conjure up green stuff. Sadly, we learn little more of how this happened as Hal is quickly thrown into battle against a bunch of intergalactic androids, known simply as The Man Hunters.

The other thing that we learn is that this game suffers from framerate issues and as the animation stutters along, it doesn’t really give the player a good first impression.

Fortunately, this problem doesn’t hinder the gameplay. However, the uninspired mechanics do.

Essentially a hack and slash game, much of it relies on you beating up the various robotic nasties before you can proceed to the next section. It is literally a case of go here, beat them up until the invisible wall disappears and then repeat the process again.

Every now and then the game will give you an object, like a door or some rocks to smash through, but that’s about as varied as it gets and when it does, it rarely makes it clear what you should be doing and at times it can take a little while to solve.

Despite the mundane level design, the combat does bring some redeeming features to the game.

The controls are quite responsive and there is a healthy amount of combos for Hal to perform that should keep the average hack and slasher fan busy for a little while. Slinging the mechanical enemies over cliffs is actually quite satisfying.

The game also keeps the combat quite fresh by rewarding the player with various upgrades, new combos, and constructs (glowing green weapons that Hal creates). The ability to assign them to your preferred button is quite intuitive and offers a bit of customization.

Visually, the game is a bit a mixed bag. While the cutscenes are marred by the frame rate issues mentioned earlier, the levels themselves are vibrant and colorful with lots going on in the background.

The audio is suitably cinematic, featuring an orchestral score (possibly from the movie) and the voice of the actor Ryan Reynolds, who also lends his likeness to the game.

The Good Good controls Engaging combat Easy to pick up

I have to thank the makers of Child of Eden as I was beginning to wonder whether purchasing a Microsoft Kinect last year was a good idea or not.

It’s been almost 6 months since I have bought Microsoft’s motion tracking gadget and aside from playing Kinect Adventures and occasionally inviting family and friends over so they can see me wave at my X-Box, I was beginning to wonder if I should keep it or not. 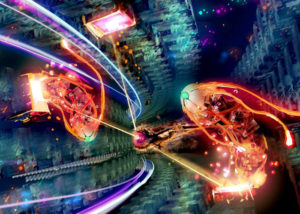 So with Kinect sitting above my TV collecting dust for the last few months, Ubisoft and Q-Entertainment have come to rescue and released what many have dubbed the prequel to Rez.

Developed by legendary games designer, Tetsuya Mizuguchi, Child of Eden is a rhythm action game set in a virtual world in the far future. The objective of the game is to Project Lumi from a virus attack.

Separated into five different sections, each one has it’s own unique identity with areas of the game looking like lakes, underwater caves and a section that appears to be the insides of a computer.

The game is essentially an on the rails shooter with a good bit of music rhythm thrown in. Execute your attacks on the right beat and you are rewarded with bonus points and various unlockables.

Playing the game using Kinect can take a little while to get used to, but once it clicks the experience is quite immersive and almost becomes second nature.

Visually, the game is very pleasing – with graceful animation and vibrant colors, the game reminds me of an up-to-date version of that not-so-classic 90s film, The Lawnmower Man.

Musically everything it’s the right note. While the trance-inspired soundtrack may not be to everyone’s taste, it fits the proceedings like a glove.

The game can be finished in under an hour but thankfully the developers have included a few mechanics that will keep the player coming back for more, including new difficulty settings and a hidden challenge mode.

Overall, Child of Eden is a worth checking out, especially if you are a Kinect owner looking for something that might be a little different. Visually and audibly arresting, Child of Eden is unlike any other game you’ll play this year.

Organic Home Gardening Tips – Going Green
Organic Home Gardening Tips – Going Green Jenny and I have been ”Going Green” since we started home gardening about 7 years ago. For us it’s organic gardening or nothing. Why would we spend time making the planet even sicker than it is now? For us Going Green ...
The Conduit 2 – Nintendo Wii
The Conduit 2 – Nintendo Wii It’s sad but painfully true fact that in light of the technical leaps and bounds made on the Xbox 360 and PlayStation 3, the latest games on the Nintendo Wii look several years older than they should. This was a nagging feeling I h...